How to Curb your Carb Cravings

So today’s presentation curb your carb cravings first of all, a little bit about me just in case you’re not aware, if you’re new or I copied this somewhere else.

So I’m not going to be preaching the low-carb lifestyle, but it’s just one way for some people to lose weight and to maintain a healthier lifestyle, so if that’s what you want to do great.

I can absolutely support you with doing that but there are alternatives and I support those people too my mission is basically to help people live fitter and healthier lives by eating better.

Not necessarily by going diet or limiting anything within their daily nutrition meals so by eating better.

You probably should be able to just have pretty much within reason whatever you want, so I did do a survey recently and thank you to everybody that took the time to fill that out, it’s incredibly useful to get that kind of feedback prior to do one of these presentations so let’s have a look at one of the questions or to the questions that I ask people what have you tried already and what works well for you, so the first person, selected here has said eliminating simple carbs.

No, that’s always going to be a good thing cutting out white bread refined sugars and even fruit juices if ,you’re drinking a fruit juice on a regular basis that pretty sugary, eating whole fruit is going to be massively better for you, but obviously if you want to have a glass of orange juice once in awhile great, but it is basically a very sugary drink and what worked well for them was just not having them in the house.

If you don’t have the stuff it makes a lot harder to actually get that stuff in your mouth another person said initially I tried increasing the number of smaller meals however this seems a strain on the need for snacking, currently eating three planned meals a day and not creating snacks in-between which is brilliant, so what really worked well for them? So they added protein, nuts or yoghurt something like that with cereal, that sustains them throughout the entire morning adding beans and lentils to their lunch salad boost of protein and fibre there and then restricting white carbs at dinner, so that white bread white pasta those sort of things and obviously those sweet desserts afterwards. Probably going to be those problem areas. Another person said just cutting back and did that work well for you at times.

Yes, yeah actually willpower is quite good at times, but if you have any kind of stress during work or relationship or just generally life happens, then you’re going to struggle is willpower because you just want to go back to some comfort food and if that’s going to be half a loaf of bread then that’s what you’re going to end up eating so a little bit and said drinking water throughout the day.

To be a little less hungry not buying the things for home but this person works in a restaurant, so not quite so easy for them because they’re surrounded by food all the time, packing lunches that are a little better and preferably just just meat and an apple or something like that and that’s a really good habit to get into making sure you have something easily available to you to be able to grab and snack on the go should again should life happen should work get busy or something go on that means.

You’re just not able to go and grab a healthy lunch and that goes well for you getting into the habit of taking my food with me, absolutely, next finding out they were diabetic really stopped them, now obviously we don’t want to have to get to that stage to realise we need to sort of Curb are carbs that were taking on a daily basis and what works well for them.

Is just getting out of the house as soon as the first person not having those kinds of things in the house makes it a lot more difficult for you to start snapping on chocolates and cookies and ice cream and snack and sweets or whatever this just high in carbohydrate and the last person chosen from the survey was I eat a little when I want and that keeps me from binging, absolutely fantastic way of dealing with this is have a little bit of what you like, but it’s more about the quantity and quality that makes a big difference, this person also varies the carbs that they have sometimes switching around for fruit or something else and what really worked well for them was allowing themselves to have some carbs without guilt and that’s a really good point too, because as I said at the beginning.

I’m not and advocates or championing a low-carb diet. I’m just trying to make sure that you’re eating better and healthier so you just don’t have these kind of cravings in the first place. For this person it’s a priority to manage his insulin levels due to the diabetes in his family and diabetes tend to run in families. So if you have a relative that has it then that’s going to be a warning signal for you.

So why can’t I stop eating carbs if you think about it for a second if it were actually carbs that you are craving than eating carbs.

Would have an effect on that craving right.

So why do you end up eating the whole packet of biscuits or cookies munching through half a loaf of bread without even breathing you’re just chewing on it constantly, eating endless portions of chips or fries, potato chips or crisps as we call them here in the UK and the last word the second to last.

Eating an entire tub of ice cream, I think we’ve all been there at certain times of extreme stress.

We just saw what the hell.

I’m just the whole thing but at the end of this after you’ve eaten the loaf of bread the biscuits that ice cream in the potato chips.

You still seem to want more why is that? Simple…

It’s not carbs that you’re craving if you think about it. Your body is craving something absolutely but if carbs are not giving you think that you need that.

It’s not carbs that you actually crave so for example.

I’m not making a direct comparison here, but just an example if you were craving alcohol then having it would help if you’re craving nicotine then smoking or vaping is going to help those cravings. If you take drugs either illicit or medication that has been prescribed to you and that has some kind of a dependency. Or you have some kind of the tendency to take that then taking that drug will help with those cravings, but just eating carbs seems to make you want to have more carbs and that’s because it’s usually not carbs that your body is crying out for so how do I curb my carb cravings? Everyone is different so it’s a really good idea to try you different things out and see what works best for you, number one is definitely have a drink of water it really does help a lot of the time your body is sending out a signal that it need something and because of habit.

We think that is a sweetness that we need actually it’s being confused with a thirst that we have so before you jump and grab that cookie that fry that piece of bread whatever it is just try small glass of water it doesn’t have to be litres of it.

Just something to whet your appetite and give you something to see if it’s actually, your body’s calling out for something to drink rather than something to eat another things weren’t really well for some of my clients. Have you noticed in the survey? Is it balanced diet of protein fat and carbs as well having a good mix and not just relying on one of them, is going to give your body? What it needs So it’s going to stop calling out and craving the certain things, a lot of clients of mine of also had a huge success with having a protein rich meal at the start of the day. Now notice I haven’t mentioned breakfast there because not everybody has breakfast or they have a late breakfast or they just get that meal entirely so whatever first meal is. Make sure it’s got a good amount of protein in it and that will really get you started off on the right foot and make sure that you’re feeling satisfied right beginning of the day. Have healthy snacks with you if you like to munch on something when you’re bored you’re stressed whatever make sure whatever it is.

you have with you is something is good for you. Maybe a small packet of nuts, so some sticks of carrots celery or even cucumber something like that. Maybe a hummus dip or tzatziki something like that to dip in if you don’t want to just you on a carrot, but ultimately have carbs.

Just think about what kind of carbs you want and see if you can make those carbs a little bit better, but do you listen to your body? Is it really carbs? Your body is craving and finally think of carbs as a side dish and not the main event. If you’re going to have a bowl of pasta. Have a small bowl of pasta to the side of whatever you having and have a salad or have a piece of fish or piece of meat or something that really sort of fleshes out whatever you’re eating for that particular meal, but think of carbs as a part of the meal rather than whole meal itself 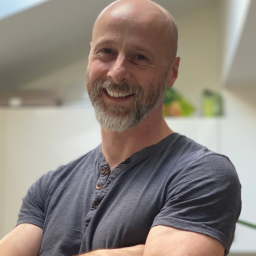 Paul is a qualified Nutrition Coach. Working with Gay Men over 40, who are looking to
Improve their health
Get fitter
Gain confidence
Feel sexier!

All through eating better and never dieting!